The initiative taken by Flanders Foal Auction to auction unborn foals in Norway was warmly received by the Scandinavians. In barely two and a half hour’s time on Saturday-night 19 of the 20 embryos were sold for an average price of 20,579 euro, often under loud applause and cheers. Not really surprising was that the Chacco Blue’s were very popular and found new owners for 36,000 and 29,000 euro.

Luk Van Puymbroeck and Gerald Lenaerts had total confidence in the collection of embryos chock-a-block with sport genes, but as with any auction, the outcome can never be predicted beforehand. “It is always very exciting, but we are again very pleased with the outcome. This year started well. What we liked best about the evening? That the public in attendance got very involved and the atmosphere was great. Eleven were sold there and then and one more for Norway via our online bidding system. It was hot online. We had almost sixty bidders from fifteen different countries ranging from New Zealand to Ireland, from Brazil to Slovakia, and they carry the auction. In the end, three were sold online, including the most expensive embryo. Via telephone three went to the USA, one to Switzerland and one to Germany.”

The auction highlight was the Chacco Blue x Diamant de Semilly x Marius Claudius, for 36,000 euro staying in Belgium to be born within the month. Great-grandam Sea Coast Ferly, earlier successful at 1.60m level under Gudrun Patteet, comes out of the celebrated 1.60m Grand Prix mare Narcotique de Muze II who was ridden by Eric Lamaze.

The Chacco Blue x Cormint x Lavall I out of the half-sister to Casall, expected to be born in July, was sold on the spot for 29,000 euro and will pursue it’s future in Scandinavia. The same buyers also invested in the Casall x Cornet Obolensky out of the full sister to the Grand Prix stallion Conte Bellini for 22,000 euro as well as in the Eldorado van de Zeshoek x Royal Feu from the line of Itot du Chateau for 13,000 euro. Other Norwegian clients spent 24,000 euro on the Emerald out of the World Cup mare Ciske van Overis (Celano) and the Baloubet du Rouet x Cornet Obolensky from the Roosakker damline.

The auction was for the first time organized at the Arneberg Equestrian Center, where Rolf-Göran Bengtsson gave clinics in the daytime. After a reception with champagne and tapas and a live band including Olympic showjumping rider Tony Andre Hansen the party soon got going. “The organization did a super job here and everyone was highly motivated. The public really went for it, right from day one when we decided to have an auction in Norway. Ann-Christine Rihm, our agent for Scandinavia, did an excellent job too. Without these people and auctioneer Louis De Cleene it would never have been so successful as it was”, say Luk Van Puymbroeck and Gerald Lenaerts.

The team has another auction on their agenda two weeks from now, the fourth edition of the Flanders Embyro Auction in Sharjah on Friday 31 January. This collection, too, is very promising and is shown online: “We will travel to the Emirates again full of confidence!” 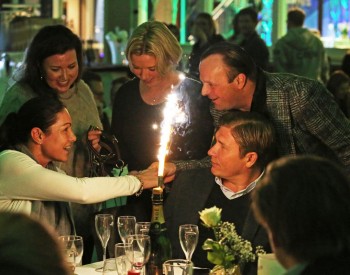