The trotting sport in Belgium is making such an enormous development that stallion keepers Filip Van Hauwermeiren and Andre Everaert came with the idea to organize an auction with trotting horses. It is the first auction for 28 years in Belgium. In addition to 63 trotters at the 2017 EVSB Selected Trotting Sale, eleven very interestingly bred jumping foals will be auctioned too, selected by Luk Van Puymbroeck and Gerald Lenaerts from the successful Flanders Foal Auctions. Hence the theme 'When trotters meet jumpers'.

Professional sales platform
On Wednesday November 1 it’s auction time. The EVSB auction begins at 18:00 at the QC Stables in Sint-Niklaas. Filip Van Hauwermeiren and daughter Karolien organize the auction together with business partners Jeroen Mortiers and André Everaert from Everaert Stud. "We think there is a need for a professional sales platform between breeders and owners / trainers. We don’t have that in Belgium at the moment, although we can speak of a revival of the racing sport. We immediately were supported by two big breeding farms, who also involved other breeders. The collection exceeds all expectations. Many people did not even know that Belgium has so much quality, " tells Filip Van Hauwermeiren.

There already has been interest from Belgium, the Netherlands, France, Sweden and Germany. An eyecatcher is, for example, a full brother of Voltigeur de Myrt, one of the best trotting horses in France with over one million euros winsome. Everaert Stud, Vrijthout Stables and Star Breeding have introduced horses, just like other breeders. "Among the 63 trotting horses, we offer twenty foals, nineteen yearlings and twenty horses who are already in training or competing. In addition, we have four breeding mares from the top breeding Dubois farm. "

The auctioning of trotting foals is an unicum, says Filip Van Hauwermeiren. "We want to show breeders there is also money in foals. Normally, trotting horses in Belgium will only be sold when they are racing. At the age of three we know whether it's a good one or not opposed to jumping and dressage horses who need first years of training. In order to properly market the foals, we have contacted Luk van Puymbroeck and Gerald Lenaerts. It's going to be an interesting mix. "

Jumping foals
Flanders Foal Auction has been able to introduce very interestingly bred foals for this fall auction. "Mostly late-born foals who were a bit too young for our auction in Opglabbeek in September. Foreigners may not come to this auction with only eleven jumping foals, but we have already received many commitments from those who have interest, " says Gerald Lenaerts.

Spectators are welcome between 14:00 and 17:00. The auction and dinner commence at 18.00. VIP tables are still available. 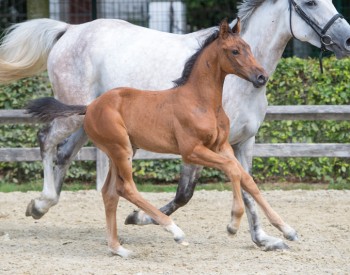