‘Honoured to be allowed to auction first embryo’s in Dublin’

For Flanders Foal Auction offering embryo’s for sale abroad is nothing new, but Dublin is a first, on Friday night 9 August. Besides embryo auctions in the Emirates and the USA, the team is now in Ireland to offer an exclusive collection of twenty showjumping foals to be born in 2020 between February and June.

Luk Van Puymbroeck and Gerald Lenaerts are eagerly looking forward to this embryo auction, although this Saturday night they first have a foal auction to run at Flanders Horse Event in Beervelde, Belgium. In Dublin, during the Royal Dublin Horse Show, the auction will take place in the luxury Intercontinental hotel located around the corner, where the equestrian public is treated to something special every evening.

Horse people
Gerald Lenaerts feels like a fish in the water on Irish soil. The professional breeder frequently visits Irish riders and numerous breeding products advertise his Studfarm Overis. “I have been a loyal visitor of the Royal Dublin Horse Show for many years. It is a fantastic show, comparable to Aachen. On a smaller scale, but cosier. All horse-loving Ireland is always looking forward to the event. Riders with young horses are preparing for it all year and hope to reach the finals. Three years ago, my breeding product won in the 4-yr-olds, Abby van Overis Z, an Arko III, sold as a 3-yr-old to Greg Broderick. What a day that was! I love to come here, the Irish are absolute horse people. We feel honoured to be allowed to hold an auction here”, says Gerald Lenaerts.

Four 'Irish' embryo's
Thanks to Ronan Rothwell from Boleybawn Horse Farm the auction will take place in the hotel. This Irish horse rearer and trainer also has an embryo in the collection himself, a Calvaro out of the dam of the 1.60m Grand Prix showjumping horse Night Train which was so successful under Darragh Kerins and Denis Lynch. “We have four ‘Irish’ embryo’s. There is a Cornet Obolensky out of the sister of Going Global, which started in the Olympics in Rio de Janeiro under Greg Broderick. Marion Hughes supplied an Emerald x Catoki, whose dam HHS Fortune is an 8-yr-old already jumping at 1.50m level and she won classes in Valkenswaard and Vilamoura. We also have a Dominator out of the 1.60m Grand Prix mare Biscaya d’Eversem, who won many prizes under the Irish Joan Green.”

Boost
Never before was an embryo auction organized in Ireland. “This offers the Irish an opportunity to buy something special and give their breeding a boost. We would never have been able to offer these horses as foals. They would have been claimed already, or be not for sale or far too expensive. What persuaded us to move our embryo auction to Dublin was the fact that from this year onwards only horses born in Ireland are allowed to start in the national finals. To get around this, an Irish buyer can have the surrogate mare come over, the foal thus to be born in Ireland. This makes that the buyer is automatically also the breeder.”

“We are extremely curious of how the collection will be received in Ireland. Of course, bids are accepted online from all over the world. It will be very exciting. The collection is super. By Tobago, the number two in this year’s Aachen Grand Prix, we have an embryo out of the dam of Convall, who won the Aachen Grand Prix in 2016. Another special one is the Chacco Blue x Diamant de Semilly, whose dam produced the World Champion in Lanaken, Kerswin van ’t Roosakker, and the fine showjumping stallion Ganesch Hero, licensed in Ireland.” 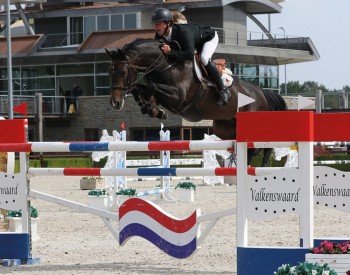 The 8yo 1,50m level mare Fortune HH (Catoki x Douglas) is the dam of an embryo by Emerald.