The very first Flanders Foal Auction held during the Flanders Horse Event in Beervelde (Belgium), will be sensational. On Saturday 3 August at the international three star show, thirty excellently bred showjumping foals will be auctioned and the influence of the celebrated top-class progenitor Chacco Blue is immediately noticeable.

One year after finishing third in the prestigious Aachen Grand Prix, Paul Schockemöhle’s favourite horse Chacco Blue suddently died in 2012 from Lyme disease. There was not a lot of frozen sperm anymore and by now it is almost finished, at a time when there is hardly a Grand Prix without a high place being claimed by a Chacco Blue product. Not for nothing Chacco Blue has been leader of the WBFSH ranking for sires for several years.

Three by Chacco Blue
Flanders Foal Auction will auction three of his products, each and every one of them born thanks to the ICSI-techniques in which one sperm cel is injected into an ovum. “It is really unique, that we can offer as many as three of them. The sperm from Chacco Blue is very hard to come by. I even hear rumours about prices of 20,000 euro per straw. Of course, a straw can go a long way since the ICSI results are so good, but it will still be expensive”, Gerald Lenaerts explains.

One of the three Chacco Blue foals is out of the full sister of Jos Lansink’s former championships mare Valentina van ’t Heike, another out of the full sister of the 1.60m Grand Prix horse Golden Hawk ridden by Shane Breen (and also half-sister to the Olympic showjumping horse London under Gerco Schröder) and a third out of – possibly the best Belgian dam - Centa de Muze (Cento), who already supplied two 1.60m level and four young 1.40-1.50m level showjumping horses. “Every product from Centa de Muze can jump. This one, too, is a fantastically supple foal”, says Lenaerts.

To make the story of this auction even more exciting, also a product of Emerald out of the half-sister of Chacco Blue will be offered for sale.

Confidence of the breeders
The remarkable collection was compiled in no time, together with Luk Van Puymbroeck, says Gerald Lenaerts. “The breeders have given us a lot of confidence. They have offered their best breeding material.”

Remarkable is also the colt by Baloubet du Rouet out of the only daughter of the European Championship mare Cella ridden by Ben Maher. This Hera van ’t Roosakker is currently successfully performing at 1.40m level. Other hot favourites will probably be the Balou du Rouet out of the half-sister of World Cup final winner Cornet d’Amour, Kashmir van Schuttershof out of the celebrated Narcotique de Muze line, the Cornet Obolensky out of the 1.60m Grand Prix mare Sissi van Schuttershof and the handsome Bamako de Muze x Hearbreaker, a half-brother of the Olympic showjumping horse Grand Cru van de Rozenberg.

Online bidding
The foal auction can be followed world-wide via www.clipmyhorse.tvand via the online bidding system from WeAuction, which is used more and more frequently. After a simple registration, buyers can place their bid on their favourite foal(s). The auction on Saturday 3 August will start around 20.30 hours. One week later, on Friday 9 August, the team from Flanders Foal Auction will offer the first embyro’s for sale in Dublin. 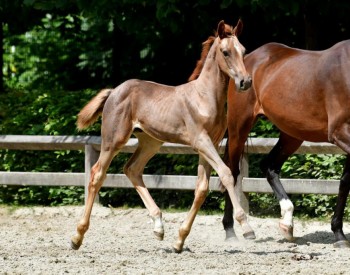 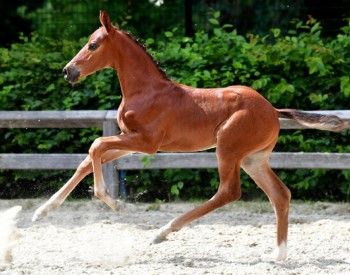 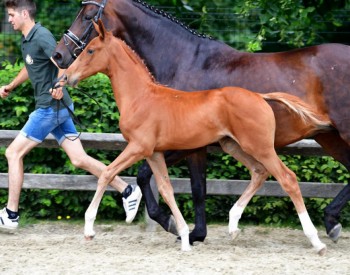 Jericho de Hus (Emerald x Levistan) out of the half-sister of Chacco Blue.