At Sentower Park Flanders Foal Auction can celebrate its magnificent ‘Grand finale’ with yet another excellent auction. That the last foal collection from this year was also appreciated was demonstrated by the enormous number of bids from the stands, by telephone and online. The dust still settling, at the end of the evening the counter shows the lush average price of 20,108 euro. Cornet Obolensky produced two of the highest-selling foals of the night, 55,000 and 44,000 euro, but also Chacco Blue has honored his name with a foal going for 48,000 euro.

From the 39 foals in the catalog 37 actually changed hands in the pleasant indoor arena in Opglabbeek on Thursday 19 September. Buyers from Belgium bought nine of them and prevented that all the top-class foals would go abroad. For example, Cera van de Berghoeve (Cornet Obolensky x Darco x Heartbreaker) stays in Belgium for 55,000 euro. Paul Van Den Bosch bred her out of the 1.50m level showjumping mare Panama du Seigneur, who already produced five 1.60/1.50m level show jumping horses, such as Tic Tac ridden by Ben Maher and Amour du Seigneur ridden by Alberto Zorzi.

Top-class rider Gregory Whatelet will have to wait for a bit before he can start him, but Notting Hill (Cornet Obolensky x Romualdo x Nimrod B) will be ridden by him. Two bidders at his table fanatically fought for the fantastically moving half-brother of Gregory’s European Championship top horse MJT Nevados who was auctioned for 44,000 euro. The quality filly Clara Z (Clarimo x Malito de Reve), grand-daughter of the Grand Prix mare Walnut de Muze, will also stay in Belgium for 32,000 euro.

Not a show, but reality

Gerald Lenaerts and Luk Van Puymbroeck are almost speechless at the end of the auction. “It was yet another great night. We have been able to demonstrate again that Flanders Foal Auction does not give a show, but actually sells foals, while not artificially pushing up the price of a single one. You have to be lucky to have two interested buyers bidding against each other every time. But it mainly depends on the collection itself. This year we have been offered the best foals for three foal auctions and embryos for two embryo auctions by the breeders, which made it easier for all of us. We are grateful for the confidence of the breeders and all the clients who joined the bidding, whether buying in the end or not. We have good hopes for 2020. With new plans, which you will soon hear about…”, said the organizers of the auction. 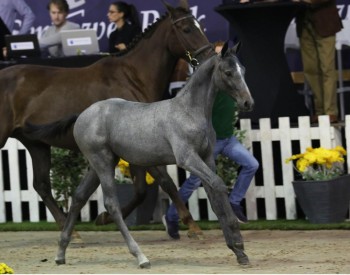 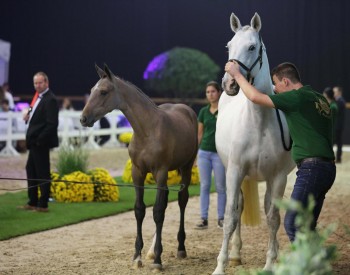 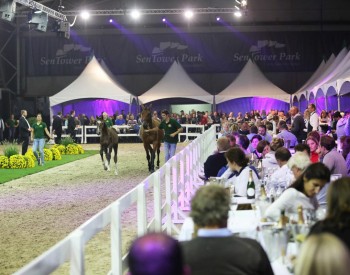