Confidence in embryo’s once more confirmed in Emirates

In a couple of years young showjumping horses will fly all over the world when they are fetched by their owners, who last Friday invested in them at the Flanders Embryo Auction in the Emirates. This fourth edition in Sharjah yielded an average price of 18,642 euro and the most expensive of the still unborn foals was one that had never been on the market before: a Chacco Blue out of the half-sister to Catch Me If You Can for 30,000 euro.

The Sharjah Equestrian & Riding Club is a truly unique location, where also riders from Europe love to go every year. Over the international courses built by the Limburg professional Henk Linders national favourites and riders from surrounding countries will compete this weekend with world stars such as Michael Whitaker and Christian Ahlmann.

Immediately after the Youth Nation Cups on Friday – which is an Arabian Sunday - the public clung to their seats for the embryo auction. The desert air cooled off considerably as soon as the sun set, but the Arabs were still hot for the foals soon to be born and to be reared in Europe. Summers in the Emirates are too hot for riding horse foals and any grass there would not have sufficient nutritional value and prohibit sound development. Once fully grown, the horses are cared for and trained in perfect manner. The thirst for know-how, products from Europe and the USA and the upgrading of their riding can not be quenched for the Arabians.

Half of the embryo collection was sold on the spot. Hosting Sultan Mohammed Khalifa Al Yahya'ie took the lead and, as in earlier editions, claimed four embryo’s. Also the internationally successful Al Shira’aa Stables was there again and made two purchases, including the Emerald out of Meredith Michaels-Beerbaum’s former 1.60m Grand Prix mare Kismet (Kannan x Furioso II) for 26,000 euro. Belgian Patrick De Roeck picked out the Don VHP Z out of one of the best earning Grand Prix mares ever, Ohlala (by Orlando van de Heffinck) from Lauren Hough. Auctioneer Dirk Zagers knocked him down for 25,000 euro.

Luk Van Puymbroeck and Gerald Lenaerts are looking back at a good auction. “We offered embryo’s out of Grand Prix mares that had never been available before and we are very proud of that. Our prime target is always to select excellent sport stock and offer a varied collection. There were again several bids made online and a regular client from Switzerland also claimed two. Confidence was boosted again.”

The oncoming auctions will take place in Bonheiden on 20 June (foals), Dublin on 17 July (embryo’s), Beervelde on 8 August (foals) and Opglabbeek on 17 September (foals). 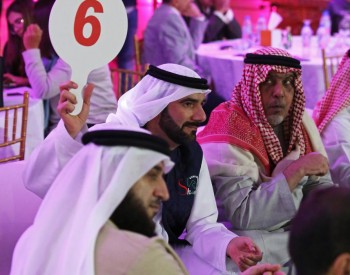